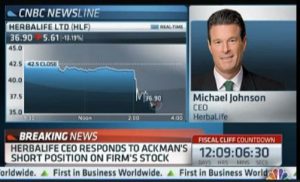 On December 20, 2012, Bill Ackman, hedgefund manager at Pershing Square Capital, announced an “enormous” short position against publicly traded direct sales company Herbalife.  Ackman laid out his argument at the Sohn Conference Foundation in Manhattan in a three-hour presentation entitled “Who Wants to Be a Millionaire?”

After the presentation, Thompson Burton PLLC partner and co-founder, Kevin Thompson, one of the top direct sales and MLM lawyers in the country, published his initial thoughts regarding Ackman’s short position and Herbalife’s decision to engage law firm Boes Schiller as its legal counsel.  Kevin’s post was widely circulated on Wall Street, resulting in numerous investment managers contacting Kevin to discuss his opinion regarding Ackman and Herbalife.  One of those discussions resulted in Robert Chapman of Los Angeles based Chapman Capital LLC authoring a guest post at thompsonburton.com entitled “Herbalife: Why I made it a 35% Position After the Bill Ackman Bear Raid”.

Direct Selling News, CNBC and Forbes linking to and/or discussing the article’s content.

The next chapter in this story will likely unfold after Herbalife formally responds to Ackman at its own investor event currently scheduled for January 10, 2013.

Thompson Burton will no doubt continue to lead the discussion on this important conversation regarding the direct sales industry.