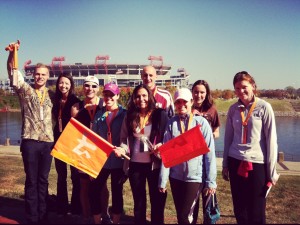 Thompson Burton’s newest associate, Alex Scarbrough, will be competing in the Tennessee Ragnar Relay this October 25-26, 2013. She, along with eleven teammates, will run 198.6 miles, beginning in downtown Chattanooga on the Tennessee River, and finishing in downtown Nashville near the Cumberland River in the Country Music Walk of Fame park. Each teammate completes a total of three runs, cycling all twelve runners in order three times over a non-stop, twenty-four hour period. A special Ragnar inscribed slap bracelet takes the place of the traditional baton, and teammates stop at various points along the course to cheer their runners along, particularly along the difficult ascents of Signal Mountain and Monteagle Mountain.

Alex’s team, named “Anne’s Allstars,” after Alex’s late mother, Anne Scarbrough, who passed away in 2010 after being diagnosed with melanoma, is in its third year of participating in the event. The team runs to raise money for the Melanoma Research Foundation and honor the memory of Anne Scarbrough. In the past three years, the team has raised $3,800 for the Melanoma Research Foundation, and even came in third place in the mixed gender team division in 2012. Thompson Burton is a contributing sponsor this fall, along with several individual members of the Thompson Burton firm.

“I feel very fortunate to be at a firm like Thompson Burton that is so supportive of its attorneys. When I told Kevin [Thompson] and Walt [Burton] I wanted to take a day off to participate in the race, it wasn’t even a question. They were 100% in support. This race is really important to my family and I as a way to honor my mom’s memory, so it means a lot that Thompson Burton recognizes and supports that,” stated Alex.

Alex is continuing the proud running tradition of Thompson Burton. Sharon Thompson, wife of founding partner Kevin Thompson, won the Country Music Half-Marathon in 2012, and Kevin Thompson is a former all-American decathlete at the University of Tennessee. Founding partner Walt Burton participated in the Carlsbad 5000 numerous years while in the Navy stationed in San Diego.

For more information on how to contribute and about the Melanoma Research Foundation, visit Alex’s first giving website. Check back next week for an update on the race.