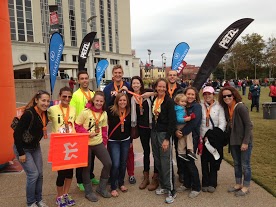 Alex Scarbrough, Thompson Burton’s newest associate, recently competed in the Tennessee Ragnar Relay.  The race began on a crisp, cool morning, Friday, October 25th in downtown Chattanooga. The temperature dipped into the high 20s as night fell, but high spirits and caffeine powered the team, “Anne’s Allstars,” through the night. Dawn broke as the team raced through Franklin, Tennessee, and the runners finished around 3:00 p.m. on Saturday, October 26th in downtown Nashville.

Two of the twelve runners became injured throughout the course of the race, requiring their teammates to run extra miles in their place. Despite injuries, chilly weather, and fatigue, Anne’s Allstars finished in 29 hours, 12 minutes, and 35 seconds, coming in 34 out of 133 teams in their division. More importantly, Anne’s Allstars raised over $1,400 in honor of Alex’s late mother on behalf of the Melanoma Research Foundation.

“I can’t believe I have eleven friends who are willing to do this race with me,” states Alex. “During our night time runs, it just seems totally crazy to get out of a warm van and run six miles alone in the darkness in rural Tennessee,” she jokes. “More importantly, I am honored and humbled that our craziness in running this race encourages others to support melanoma research. Hopefully in the future, others will not lose loved ones the way that I lost my mom due in some small part to our efforts.”

The first giving page supporting Anne’s Allstars and the Melanoma Research Foundation will be active through December 31, 2013. Click here for photos from the race this past weekend.